Skip to content
There was an enormous storm overnight and when I woke up, a tree had fallen over outside my room! There were more cockroaches than usual in my room and I just spotted a large spider walking away outside the room – yay!

I have another early start – today I’m going to Morogoro International School to talk to the pupils at the assembly. I’ve not been to a school assembly in so many years!
I got a lift with Lily and her three little ones to the school, arriving in time for the secondary school assembly at 7:45. I met Edward the headteacher and we waited while some helpers swept the rain water out of the room. Then children began to appear from every direction carrying their chairs to the assembly. Even the year 3 – 6 children joined us so it was a really busy room!
Edward briefly introduced me and then handed over for the half hour. I gave the kids an overview of how I ended up becoming a mechanical and explosives engineer and I talked about The Wandering Engineer project and about wanting to inspire children to take an interest in STEM subjects. The teachers started off the questions but soon there were lots of children asking things too. It was a great first introduction for me into the role of talking to large groups of children – they were so well-behaved. I made it onto the Morogoro Internation School blog! 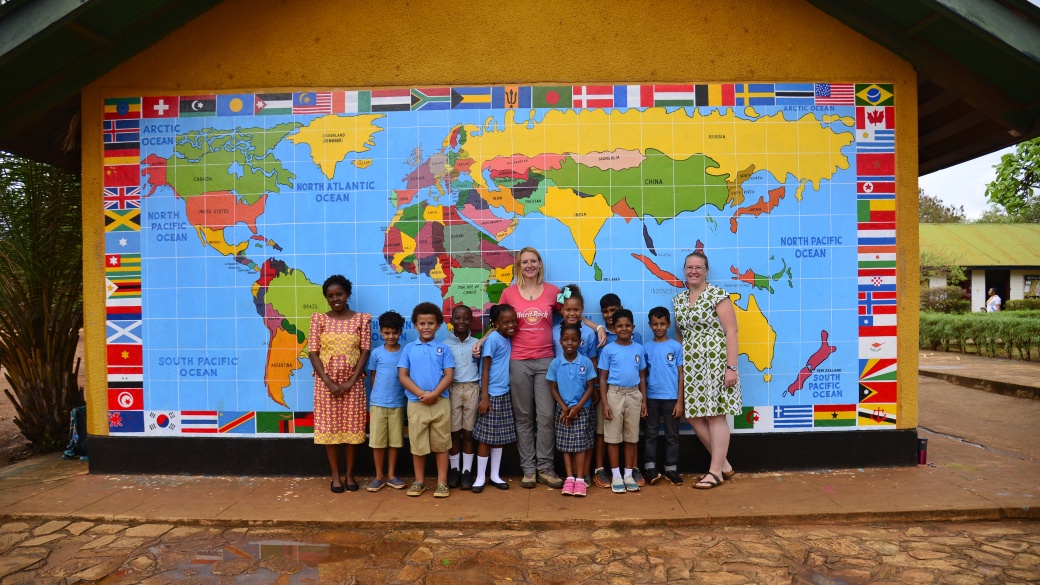 I got a chance to meet some of the students studying for their science-related A Levels and got a few questions. Then I got to see the Year 3 class again to have a photo taken with them by the map of the world on a classroom wall.

Lily took me to the immigration office to try and get my visa extended by a week but the guy wasn’t happy to do it as I still had three weeks left on the visa! I wish they didn’t want me to cut it fine but I hope I can sort it in a couple of weeks.
We returned to the office for lunch and then I jumped in the car with Naro and Mike to visit a local primary school. Naro is the HR manager for APOPO and Mike is the Mine Action Programme lead and has been based in Cambodia for 6 years, but he grew up in the village we were visiting and he attended that primary school. I had been asked to support the school by donating some useful items for the children and Naro had arranged to buy exercise books, pens and a mathematical set (with compass, protractor, pencils etc) for each student in a huge class of 70 children.
When we arrived, I was greeted by the head master and we went to his office so I could sign the guestbook. Then we went outside and the children began to file out of a classroom and form very neat lines, with a pair of lines for boys and another pair for the girls. They waited silently. I looked over at the head teacher and he translated a brief introduction from me. Then Naro, Mike and I handed out the gifts. It wasn’t something I enjoyed. The girls all really gratefully held out their hands, thanked me and curtsied each time I handed them something. It made me feel a little awkward. I’m strongly averse to anything that smacks of white saviour behaviour at all, and I really don’t believe it mattered that it was me who donated the stuff. I decided that I would feel better if I could have a bit of a conversation with the children so it wasn’t just a case of turning up, dishing out stuff and then driving off. I told the children a bit about myself and the project and said if they had any questions then they could think about them and ask me. Meanwhile I had a question for them – I asked them who had an idea what they wanted to be when they grew up. Some confident hands went up immediately and then lots of others followed. The answers ranged from policewoman, pilot, netball player and nurse amongst the girls to soldier, engineer, vet and footballer among the boys. After that, the children asked me a few questions, with the deputy head teacher translating.
Some of the questions themselves were very interesting and it made me feel like there was actually some chance that I might say something that helps one or more child here see that they can achieve their dreams if they set their sights on them.
I was asked how I knew I wanted to be an engineer. Then I was asked how I am able to learn and remember technical things (to which I gave two answers including that I learn through patterns so I try to find a pattern in anything new I am learning). I was asked how I achieve my hopes and desires; again, I had two answers translated including suggesting that children try to find role models who are successful in something the children want to achieve and to understand their behaviour and copy it. There were a few more questions and it was nice to have a more personal visit and a chance to talk to the children.

My phone had a complete meltdown earlier in the day so I spent some time trying to sort that out and then arranged to go to Nashera for dinner with Cindy, Brett and Ira and Mica joined us there. I ordered a mango and avocado salad to start which was absolutely delicious but my main course was totally forgotten and so we waited over an hour for it after the staff had been reminded! The food was nice but the staff seemed to avoid coming over as they knew they had forgotten something! Got back home quite late and I was really tired. It was a good experience to talk to the kids and good practice for future talks.

One thought on “14. APOPO and school visits”