I’m not sure how to blog about the next two weeks. I’m going to be at APOPO Headquarters and Training Facility shadowing all elements of the operation here for two weeks. Because I have the luxury of chatting to the whole team on multiple occasions so I’ll see how things develop.

Today was a great first day. Dr Cindy Fast, Head of Training and Innovation at APOPO, came to collect me from the Rest House and we walked next door to the APOPO facility. We had a chat in her office about the plan for my visit and practicalities of settling in and then I met Lily Shallom, the communications manager who chatted to me more about APOPO and then took me around to meet most of the team and showed me around site. I also got to see a couple of books that have been published featuring sections about APOPO. Lily also has a coffee grinder and coffee machine in her office (along with air conditioning) so she is a good person to know. 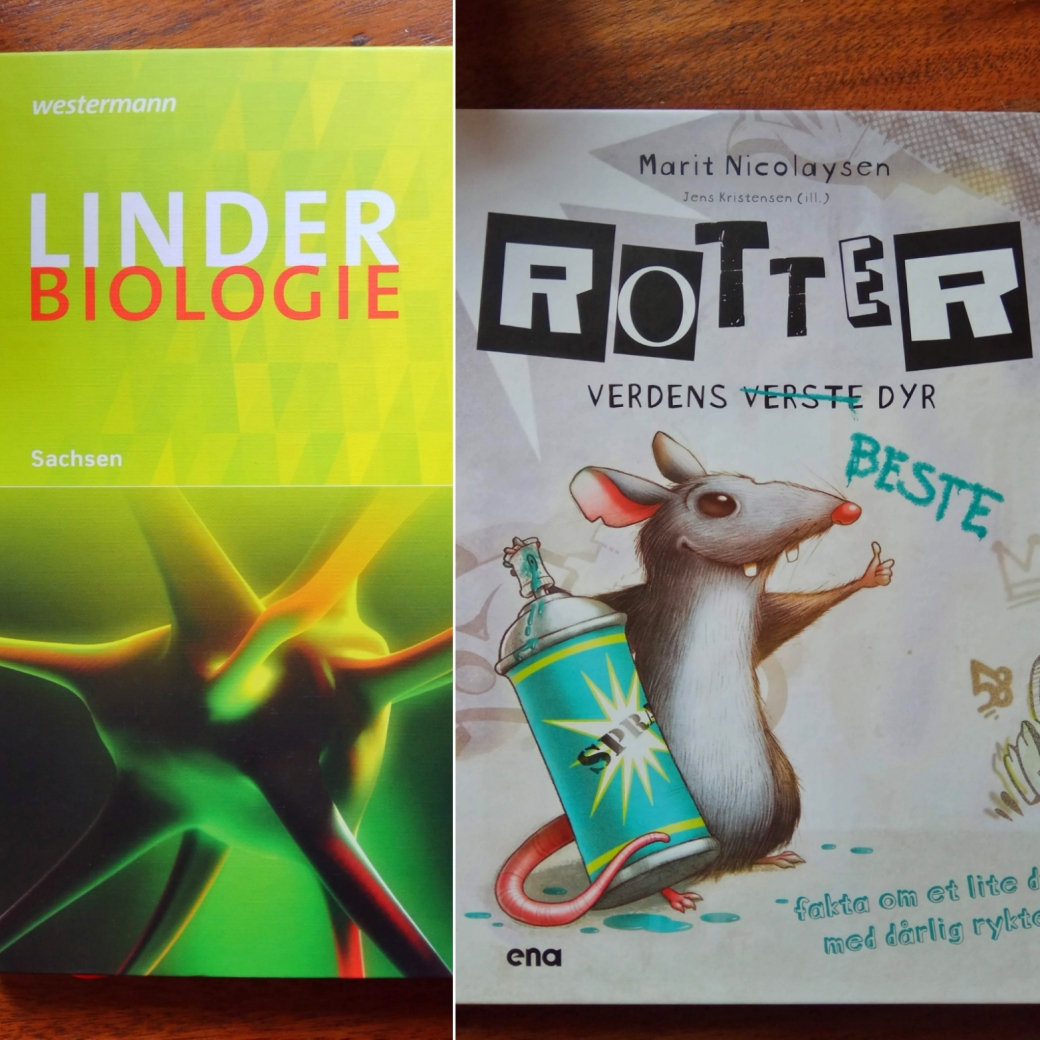 I went to lunch with Lena, Head of Tuberculosis (TB) and we had a chat about how the rats are being used for a pilot in TB detection. It’s really interesting to discuss interesting aspects of odour and scent detection and Lena has sent me some scientific papers from different APOPO studies which I’ll be reading over the next couple of days. 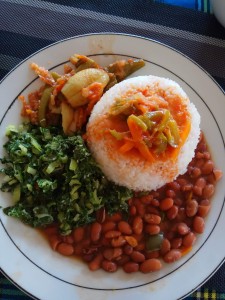 In the late afternoon I did some reading back at the rest house and then Cindy and her husband Brett picked me up and drove to Oasis for dinner, where we were joined by Christophe, APOPO CEO and Co-founder and his partner. The menu is full of nice Indian and Chinese dishes and I had a vegetarian sizzler which was spicy but tasty.

It was quite a late night and with one or two power cuts where the fan would cut out and I would wake up hot and sticky but I slept well enough.

This morning, I started off by meeting with Iyungu, who has worked with APOPO since very early on – he’s been here for 19 years! Now he prepares the samples to help train the rats and also assists the research team with the preparation of samples for new experiments. He’s really nice and extraordinarily clever. We spoke about lots of interesting things including a discussion about why in certain cultures it is not polite to ask people their age. I found out later that he always comes up with a bizarre question for the new people he meets. I guess mine was the bit about Brexit. He showed me around the lab and the various pieces of equipment that are used to prepare scent samples for the rats.

Then I met Pendo, who is a Mine Detection Rat trainer as well as being the head of the Animal Welfare team. She showed me the play cages where the animals get time in a larger space to roam and dig each week. Then I got to see one of the rats training to detect a tea egg filled with nutmeg. This rat is going to live at a new Children’s Zoo at San Diego zoo to raise awareness of how amazing the detection ability of these rats is.

This was the first time I had seen an African giant pouched rat out of its cage. Pereka is so cute and really friendly too. While the rats are working they wear little harnesses that Pendo makes herself, though they follow the trainers around like little puppies when they are off the lead.

The soil floor training is the second phase after the rats have a small introduction to soil on a table top. This is where they encounter the tea eggs full of the target scent.

I wasn’t certain what to expect but the rat pings back and forth across the 3m wide soil pit fairly quickly along a piece of string stretched out across the pit between two trainers. Each of them take a step forward each time the rat makes the journey between them and the rat sniffs all the way from one side to the other, just stopping if it detects the scent it is trained to find. Pereka worked more quickly than I expected and it was super cute when she found one of the buried tea eggs, picking it up like a dog to carry it towards the sound of the clicker – this is the signal that she is going to get a reward.

Next I met Albert, who is in charge of the rat breeding programme. He is the first human that the rats meet and he is responsible for the socialisation and habituation training which gets the rats used to being handled before basic training. Today he is caring for 11 babies from 4 different mothers, though there are a total of 31 rats in the breeding kennels. Every day Uncle Albert weighs each rat and checks it for general health. The mothers also get some time out in the play cages to give them a much needed break from the babies!!

I was able to spend some time in the rat dormitories (separate male and female accommodation blocks) so I could see more of the rats. Twenty four of the rats have graduated from advanced Mine Detection training and are waiting for a flight to Cambodia, ready to begin working on the mine clearance operations there. I got to meet these Hero Rats getting some relaxation before their trip. 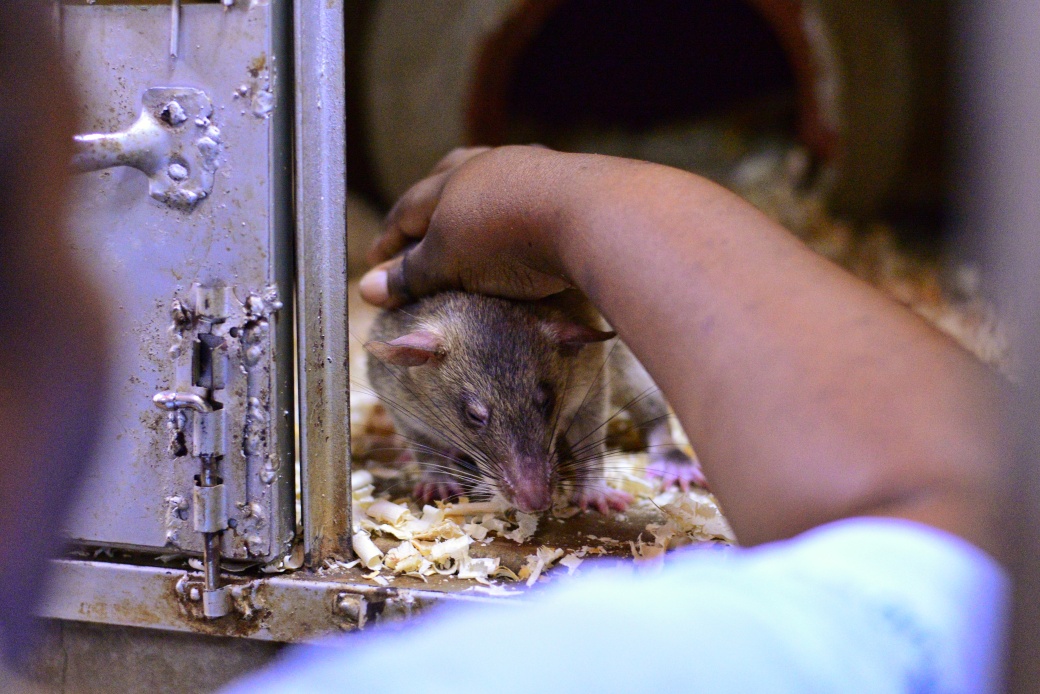 One of the friendliest rats is called Iceberg, I got to hold her for a while. She took a while to settle down as I’m sure she needs to get used to my smell. 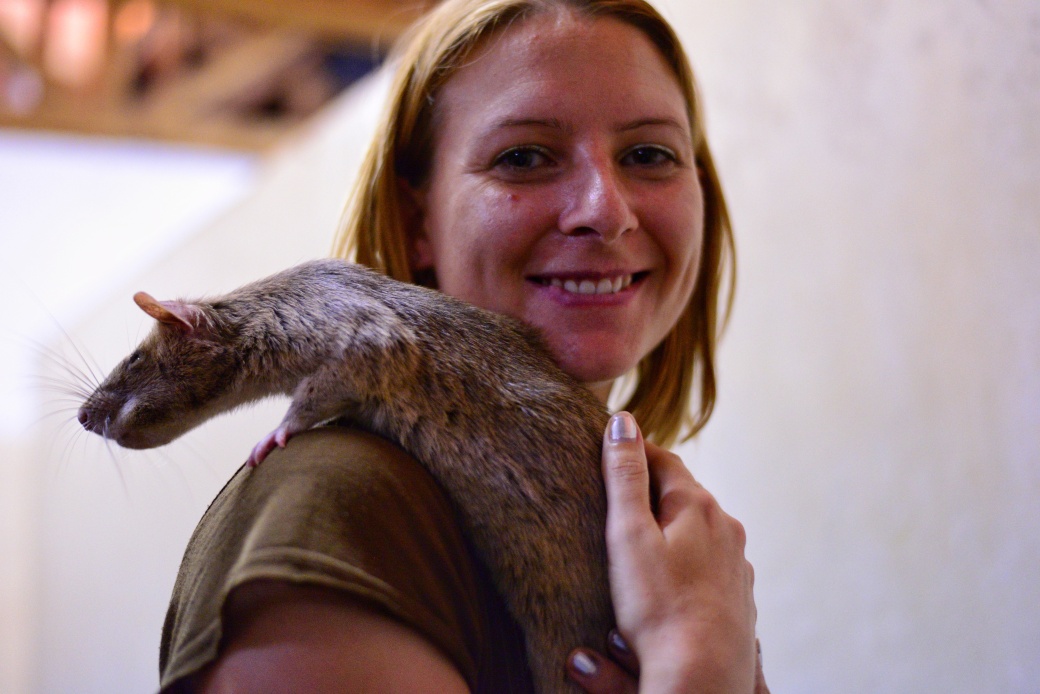 The male rats were more deeply asleep and I could see lots of cute little toes poking out of the nests. 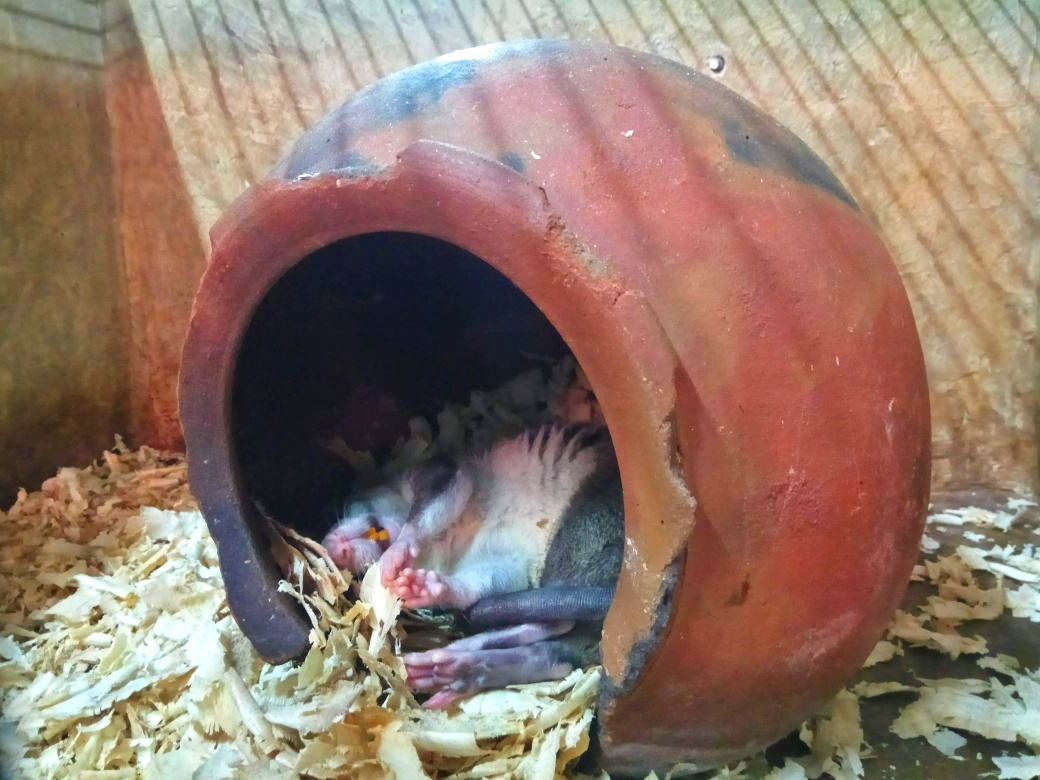 We visited the retired rats too. These little guys are given nice big cages with different levels to explore. The rats usually live between 6-8 years but some live up to 11 years. There are a few different reasons a rat would retire but APOPO care for the rats really well when they get old. That was another thing I didn’t really expect to see but it was really nice.

I had lunch with Ellie and then went back to the researchers office where I interviewed both Ellie and Miriam about their projects at APOPO, including some new ones in the pipeline. We were done quite late and I had a short while to type up some things before Mica came to the Rest House to collect Anne and I for dinner.

We went back to Oasis and met Ellie and an American teacher called Emily and her Tanzanian boyfriend, Deus, there so it was a good sized group. We chatted about all sorts and time flew by. We all ate too much and I was so glad to get a lift home and lay down!!

I had to get up before dawn to go to the rat minefield training session, but I was woken up at 5am by a crazily noisy cricket.

The rat bus left as soon as they had packed up the rats, and because many of the rats are now waiting for deployment to Cambodia, it meant that the bus left early and I just saw it driving off as I was walking there. So I jumped in the car with Lily as she drove down there to meet a group of school children to take them for a tour.

The Morogoro International School children were 7 years old and had some good questions about the rats and their work. It was already scorching hot by 7:30am with no breeze – the hot weather is on its way now. 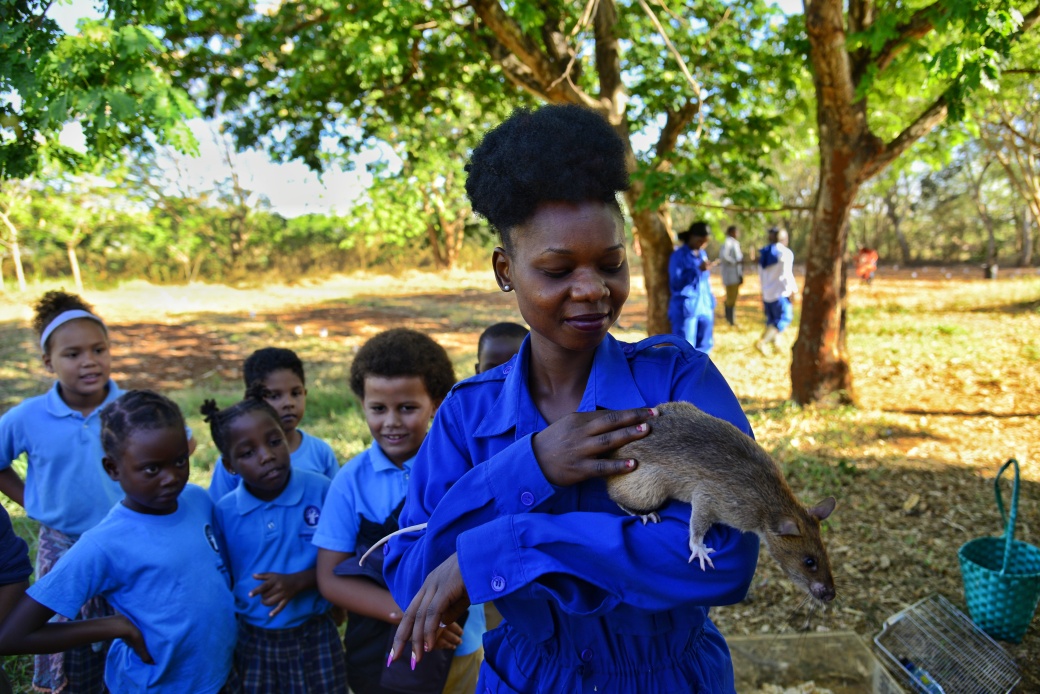 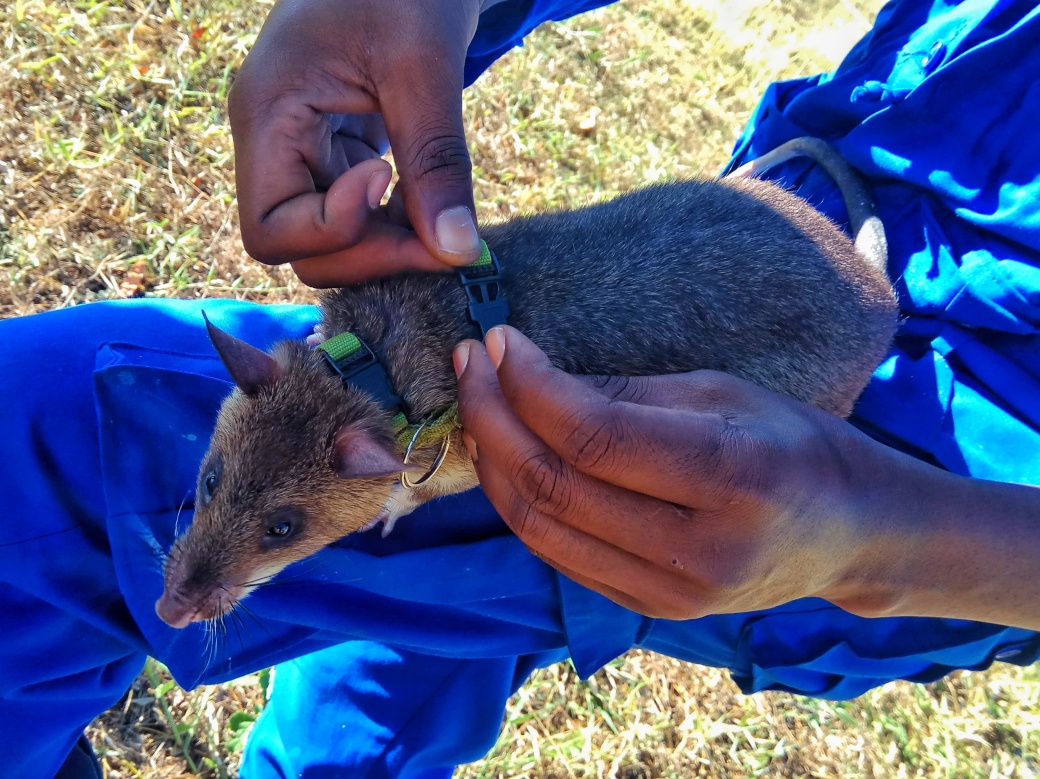 I found out that Lily is really into bird watching; she spotted a well camouflaged bird on the way down to the mine lanes and we both snuck back down there after the children had left to see if the bird was still around. Lily got a good photo of him and later on, when her 8 year old son stopped by the office, he took one look and knew it was a thick knees. He was absolutely right too! Their passion for birds is really contagious.

I had some time to write up notes and sort photos and then I had to prep for a lecture for the research team and the Mine Detection Rat trainers. I decided to put together an introduction to explosives and explosions lesson that ended with a section about TNT, as this is what the landmines being detected are filled with. I created some slides on my new tablet, first time doing that and it went alright. Then I headed over to the Horticultural Building of Sokoine University of Agriculture next door. The presentation went well and I had a few questions from Lily to start things off but pretty soon I had some excellent questions from the trainers which really helped bring to life the kinds of things they experience in training the rats. We discussed some ways in which we could learn a bit more about how it is that the rats are able to detect the landmines, as it’s unlikely to be simple. It was an interesting multi-disciplinary gathering and it’s just further reinforcement that people with different backgrounds and different experiences really add value when they come together from different perspectives.

I did some more typing up of notes and didn’t make it home until gone 5pm. Mica collected me just after 6pm to take us to Gymkhana, the golf course and restaurant where lots of expats play volleyball on Wednesdays and then have a buffet dinner. I met loads of lovely people and lots of them are teachers at the Morogoro International School, where I’m taking an assembly tomorrow morning, so they had all heard about me. It was nice to relax and chat. I met an American woman called Dee who is an intern at a farm outside the city. She is keen to hike with me at the weekend, as are a couple of the others. It’s been another long (but really enjoyable) day and I was keen to get a reasonably early night.