Skip to content
I had a really early start today after deciding on a reasonably large change of plans late last night. I’m still going to Tanzania but instead of Dar es Salaam, I’m taking the first flight to Mwanza so I can visit OffGridBox projects starting on Monday.
My first experience of Tanzanians was quite an interesting one and potentially not at all representative. My plane to Mwanza stopped at Kilimanjaro airport and collected passengers before our onward journey. The lady that was going to sit in the seat next to me didn’t hesitate to wake me up by putting her handbag in my lap and resting on my shoulder. But on the first leg of the flight, I was sitting next to a really nice South African woman headed to climb Kilimanjaro tomorrow on the same route I’ll be taking in four weeks!! I looked out of the window and spotted an enormous mountain towering above the clouds – my first sight of Kili – it was breathtaking! Appears to have less snow than I expected.
I arrived at the airport and had some fun and games with my visa, which runs out before my flight to Angola, but I should be able to get an extension while I’m in Morogoro. The immigration “system” is mind boggling but I did get out relatively quickly (and much quicker than all the other foreigners). I had to show my yellow fever vaccination certificate and have my temperature taken and entered into an official log.
Then once I had collected my bag, there was no obvious exit and I was shown back out onto the airfield and into another door which led straight out to the street. I had hoped to be able to buy a SIM card at the airport but with it being Sunday, most things are closed.
I also thought the bus stop might have been at the airport but I was told by a taxi driver that it was in the city, a drive away. I’m always sceptical when being told I need to take a taxi by a taxi driver but I think Kennedy actually did want to help me.
I popped to an ATM because without a great sense of whether I can pay with mPesa or card, I don’t want to get caught out this early on. I paid a withdrawal fee at CRDB.
I paid Kennedy 25,000Tsh for the taxi ride (but then he did help me until I made it safely to the bus). I paid 2,000Tsh (£0.69) for a SIM card and 1,000 for data (£0.35). Then I paid 7,000Tsh (£2.44) for the 2.5 hour bus ride to Bunda.

The countryside reminds me of Mozambique, partly because there are so many people cycling on this busy road with crazy loads taking up most of the lane. But very few people are doing it alone, there are lots of pairs and there’s and they are chatting and smiling. There are also lots of birds – mainly herons and Marabou storks – that are totally at ease around people.
Nearing Bunda we saw a huge herd of elephants quite close to the road – the Serengeti national park touches the road for a short stretch.
I jumped off the bus when we reached the beginning of Bunda and I walked from the bus stop towards the big rocky hill and found Tembea Mara nestled at the foot of it.

This haven has blown my mind. It couldn’t be more different from where I stayed in Nairobi (the trucks were unbearably loud and I had to sleep with the best earplugs possible).
Tembea Mara is beautiful, with lovely plants growing everywhere. I’m staying in a pre-pitched tent close to the main building. The tent entrance is pretty rugged and Yusuf and Aisha said that it’s to keep the baboons out. Hmm. 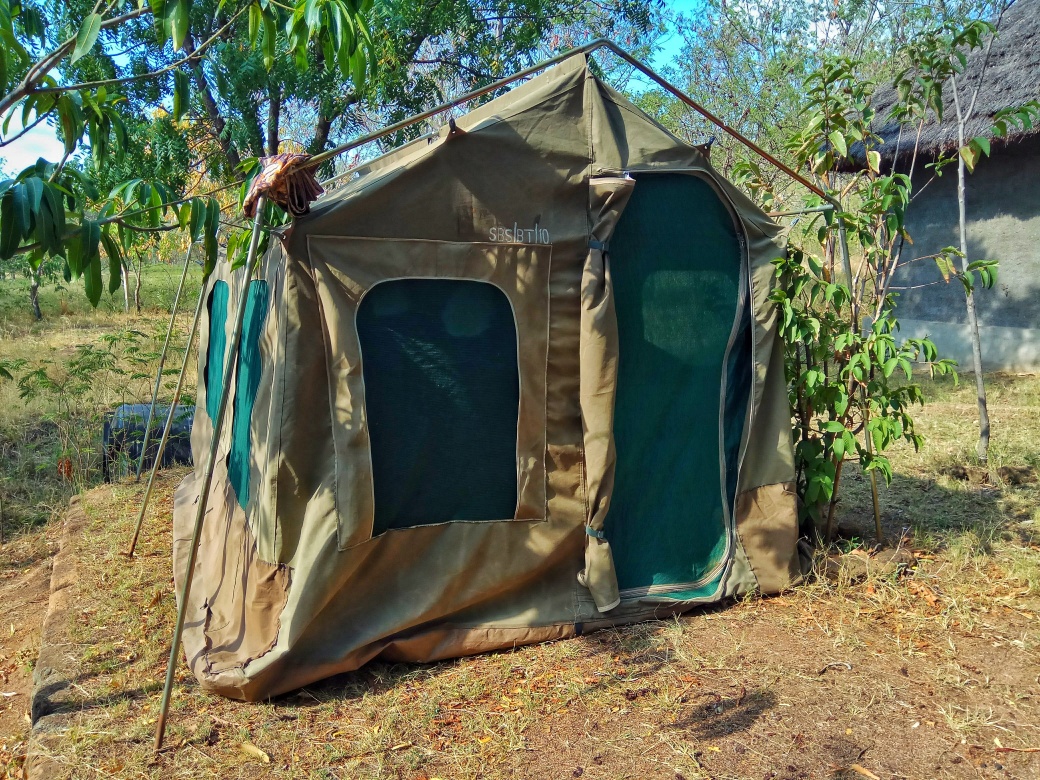 It’s really nice to have arrived early enough in the day to enjoy the full evening here. There are fascinating lizards scratching around in the fallen leaves and racing after bugs. And some stunningly blue birds which seem pretty content to hang around here. I can’t quite tell what they are yet but they are gorgeous.

This afternoon I met a really nice English lady called Helen who lives and works here for part of the year. She was intrigued about how I came to be in this particular place as it’s so off the beaten track.

I had a relaxing evening watching the sunset across a flat area west of the campsite. Aisha is really nice and her cooking is delicious. I had hoped to wait for Jodie and Nicole but I got a message to say they were delayed and wouldn’t be back in time for dinner so I ordered bruschetta and chicken vegetable pasta and sat out watching a lightning storm in the distance as I ate.

I’m really happy that my tent actually has a bed in it, complete with mosquito net – it’s pretty fancy!